April Fools’ 2017: The Best of the Best Retailer Pranks

First there was the “Instagram” filter on Snapchat (bit strange). Then came the text messages from friends, discussing a new marmite on the block that would cease to divide people: Meh-mite.

Shortly after, news spread about Google gnome. An AI-powered ornament that could play fetch with your dog by “throwing squeaks thither and hither via 3-D sound” seemed a bit implausible, even for Google.

The final straw came with an expose in The Guardian about George Osborne’s new clothing line: Georgio.

Now that could not be true.

That’s when it dawned on us: April Fools’ Day. A day that has been celebrated in the UK since at least the nineteenth century, but still manages to get us every.single.time.

This year, our retail friends seem to have become more tame—with many opting for the “this discount is no joke” strategy instead. Luckily, however, there were a couple of dozen brands delivering the lols.

From subtle jest to more ridiculous tomfoolery, here are our top 12 April Fool’s Day pranks of 2017.

(P.s. If you’re still watching the gif at the top, it’s time to stop!)

Remember those really cool scratch and sniff books your mum bought you when you were little? Endless fun. Which is why we struggled to contain our excitement when we saw this email from Boden announcing a new range of scented fabrics. Accepting the range was fake wasn’t easy. 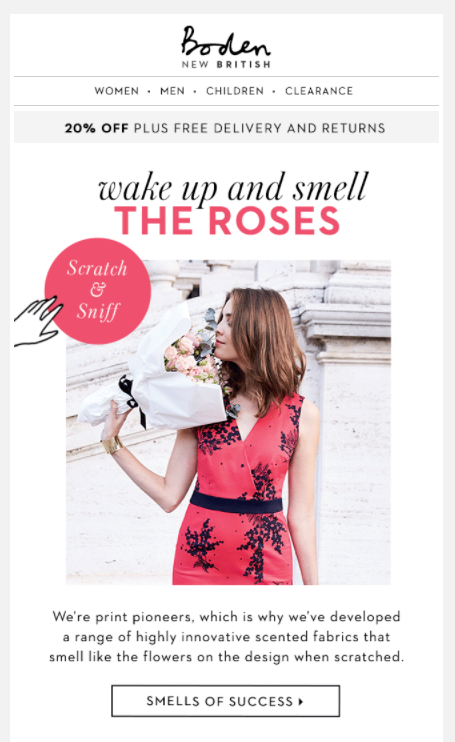 Jumping on the technology bandwagon, Wayfair decided to fool consumers into believing it had created the world’s first voice-controlled smart sofa: Sofia.

In a video on the retailer’s website, the couch is filmed reminding its owner when they had their last glass of wine (before agreeing to give them a massage) and reprimanding the owner’s children for jumping up and down on it. Click the image below to watch!

On Saturday, Oasis announced it would be taking on the world of interior design with “printed paint”. According to the brand’s email, shoppers would be able to choose from polkadots, petals and parakeets —all of which would appear on their wall in the stroke of a brush.

One Ometrian actually believed this. 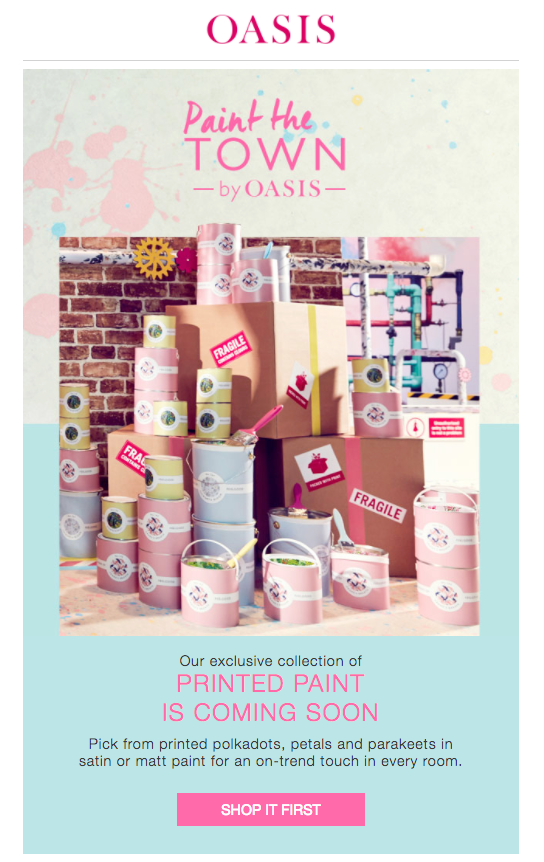 In a bid to combat the ongoing issue of parcel fraud, Zappos took to YouTube to reveal its brand new creation: the in secure box. But, for all its perks, is an invisible box really that practical? Video = laugh out loud good.

Boohoo couldn’t resist tricking its army of loyal followers into believing it was launching a food delivery service to cater to all their “hangry needs”. From template design to tone of voice, the spot-on marketing in this email had us signing up pronto. 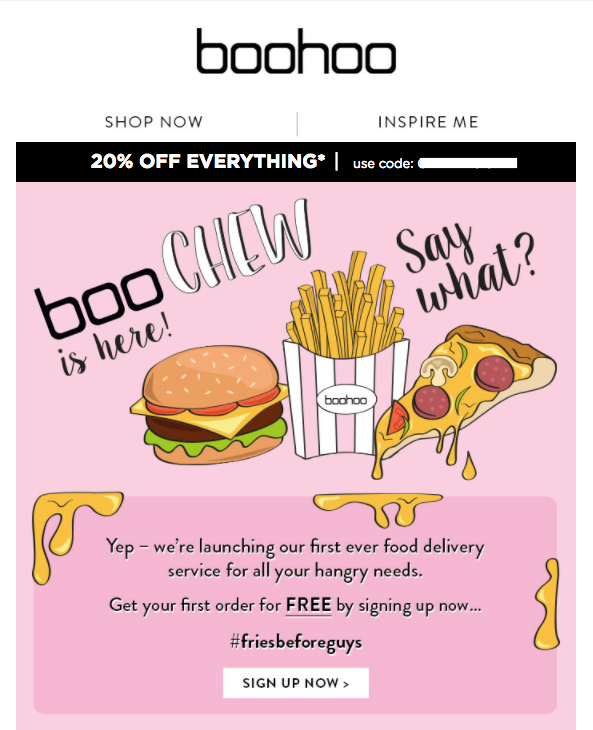 April 1st marked the first day of ASOS’ new delivery option: Model Delivery. You can even choose which model you want at your door, parcel in tow. (We’ll have Joshua, please).

Your ASOS order just got a serious upgrade pic.twitter.com/9x8sDw4fqq

Super Furry … watches? This video introducing Analog Watch Company’s The Companion Collection had us cryin’ with laughter. Brownie points for attention to detail.

Thought your ceramic bird bath was swish? How about splashing out on a hot tub for birds.

Wilko asked its consumers to “share snaps of the little starlings enjoying a dip in the hot tub on Twitter” before admitting it was a prank. Judging  by the retweets at at least six people believed it—not bad!

A little birdie told us our bird hot tub is an… APRIL FOOLS! RT if you believed it pic.twitter.com/Sh6JtSbIo6

***UPDATE: Sadly, due to the lack of vineyards in Benidorm, #WhoopsJuice will not be going into production in 2017, or probably ever. We’ll just have to carry on making bad decisions without it *** Introducing the first ever Missguided wine – #WhoopsJuice After realising we’ve got quite the “nose” for fashion, we have decided to turn our attention to our second favourite ‘D’ word – DRINKS! Our grapes hail from the well-known wine region of Benidorm, Spain, and if you could sum Benidorm up in a mouthful then Missguided #WhoopsJuice would be it. The beverage has already cultivated quite the celeb following, with Kendall Jenner “refusing to comment” because she was probably too busy enjoying a glass. Drake also described it as his current drink of choice “if it was the last thing on earth to drink”…Whoops Juice is clearly giving him more life! Get your hands on a bottle of the only drink to be seen with this summer, available for a limited time only. Happy bad decision making! #missguided

And there we were thinking Moleskine was more trees than technology.

The Italian papermaker announced on Facebook it had created a docking station that could let users take notes and charge their phone all in one place, with “no USB needed thanks to new PaperTricity™ technology”.

Distressed chinos, anyone? What we love most about this April Fools’ email is the round up of quotes from the folks over at Bonobos HQ (shown on the right handside below).

P.S. Bet your bottom dollar at least one poor blighter tried to add these to his basket. 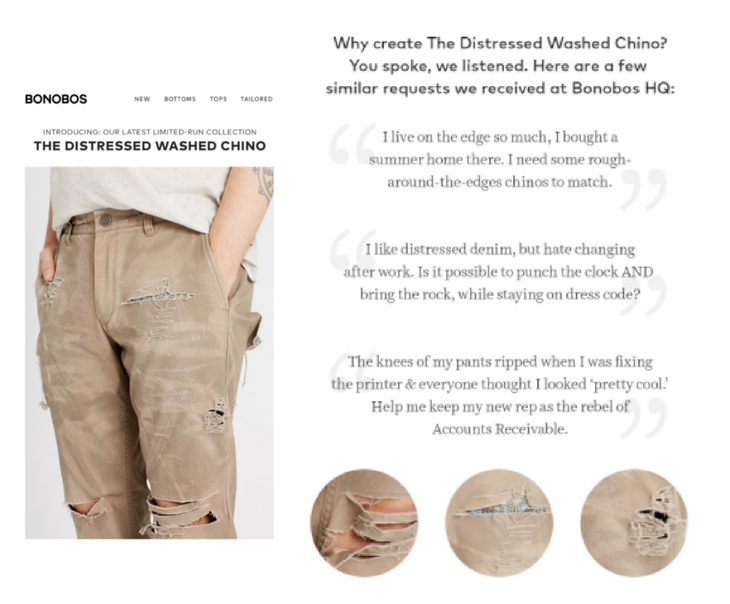 Some Tomfoolery advice for April Fools 2018

When it comes to comedy, we’re no experts. But after spending the weekend monitoring the ecommerce industry’s April Fools’ game we’d offer the following advice:

Best practice
Posted 03 February 2022
Are you sharing the love? – Our top tips for this Valentine’s Day
Jessica Beam
Black Friday
Posted 05 December 2019
3 Black Friday campaigns that will have customers back for Christmas
Alegria Adedeji
Cross-channel marketing examples
Posted 02 April 2019
Gotcha! 4 of our favourite April Fools’ 2019 campaigns
Alegria Adedeji
×
Like what you're reading? Never miss a post by joining our mailing list